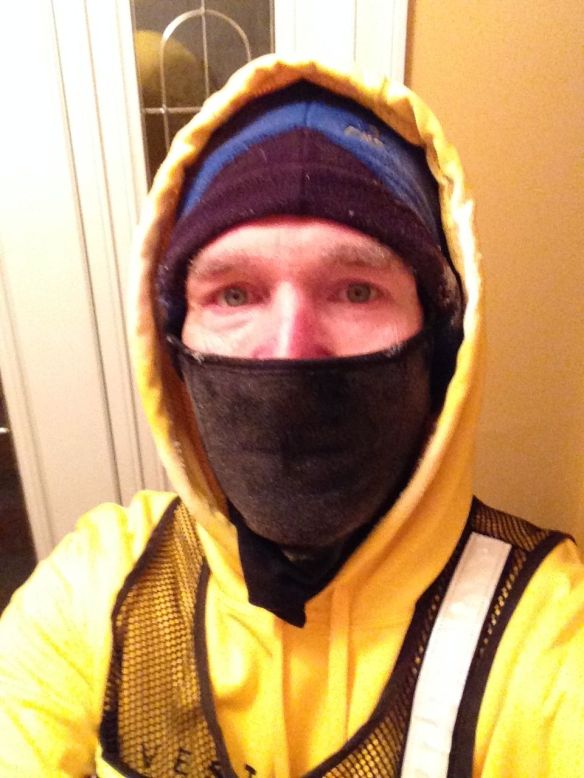 Is it just me or does the incessant naming of storms make them all lose their meaning? I don’t remember when news stations started naming storm events like ‘January Juggernaut’ and so on … so while I suppose having named arctic storm systems similar to tropical storms is better, it all just gets lost after a while. At least ‘Polar Vortex’ has an actual meaning, even though I think the best part was having Danny dancing around the living room pretending he was a new comic book super-villain named ‘Polar Vortex’ loaded with bad puns!

While I had planned to take Tuesday off as a rest day due to the ‘Polar Vortex’ driving temperatures to -30F wind chills, the forecast had Wednesday morning being in the 10F range with greatly diminished winds. Well, apparently the polar vortex had other plans and it became clear that Wednesday morning was going to feature near-zero temperatures and sub-zero wind chills.

Of course I had myself determined to go out running.

Whether that decision was strong, stubborn or stupid depends on your point of view, to paraphrase Obi-Wan. I’m going with stubborn, whereas Lisa made her opinion clear this morning – and basically, considering the kids DID have a two-hour school delay due to dangerous wind chills, it is hard to argue her point.

Anyway. So I went for a run this morning. My iPhone told me it was 2F and -12 Wind Chill … but looking outside at the branches I thought it might be colder (OK, I was prepared for -20 wind chill).

First, there was a great deal of mental preparation involved, in terms of what to wear and also what route to take. The route was important because I wanted to be sure I had an ‘easy out’ at all times – fortunately the way my general runs are routed I have fantastic access back to my house and am never more than 0.75 miles away.

How long did I plan to run? At least 1.5 miles, based on how I started out. After that all bets were off.

I call this a ‘clothes challenge’ because I was going to wear some things I had never worn and others that had never seen these temperatures. That made my choice of route more important – because with this level of cold you are dealing with a serious time factor.

OK, so now to the nuts and bolts: how far I ran and how I felt.

Let’s start with distance – I ran 6.75 miles, and grabbed the picture right as I got home.

What does that mean? Well, for 95% of my body I felt great – cool at times but never cold, and never overheated. As I got to the last couple of miles I could feel a bit of a chill around my knees just above where the compression socks ended, but nothing even remotely cold. I knew I was a bit sweaty on my bottom layer, but again nothing that I felt when I turned into the wind. So for 95% of me it was a total success.

The other 5% of me almost sent me home twice. I have remarked how my hands get cold easily, especially for the last 5 years or so. Just pumping gas in my car and Lisa’s was enough to get them really cold last night and this morning. I have also noted that the Under Armour Extreme Coldgear Infrared gloves leave your hands a bit cool for the first mile or so … and that was absolutely true this morning.

In fact, after just over a mile my hands were cold, and I nearly headed home. In fact, I actually turned around twice as I was heading up the hill about 1.25 miles from the start – which would have resulted in a 0.25 mile run home. But I made a deal with myself – I would finish that neighborhood loop and if I was still cold I would head straight home, which would then be around 3 miles. One important thing I knew was that I was just cold – not dangerously cold because I was covered and moving. I kept my hands and arms in constant motion, and by the end of that loop I felt great – so I kept going.

Around 4.5 miles my left hand was feeling cool again – but not as cold as before, so I made another deal for the breakpoint between 5.75 and 6.75 miles. As it worked out, I was warm again, and felt pretty good for the rest of my run, to the poi nt that I took off my gloves in my driveway to stop the Magellan.

As I mentioned, Lisa was annoyed and thought my decision to go out was stupid and that I could have gotten hurt – and she is right. Wind chills low enough to delay all of the area schools should really have been my cue – and although I have run in colder weather, the lack of bad results doesn’t make a decision any less risky.

Which gets back to my #1 goal for running – making sure I can get up to run tomorrow. And while certainly there is always a risk of injury when doing almost any activity, it only seems logical to avoid a situation that unnecessarily increases that risk – like days where the Weather Channel has a big read ‘severe wind chill alert’ across it and schools are delayed to keep kids safe.

What do you think? What are your temperature/ wind chill limits?