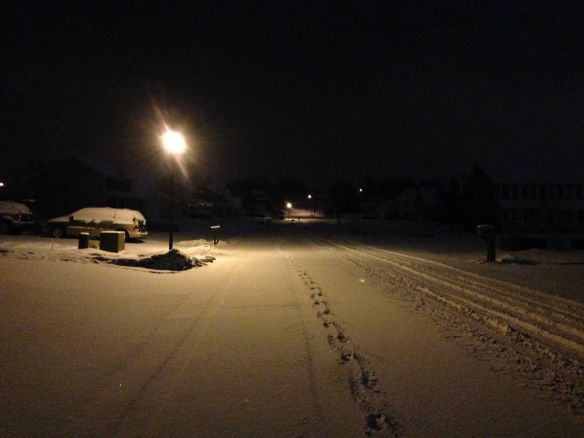 This has been a pretty crazy weather week, and the ‘polar vortex’ has been slower than expected releasing its grip on the Northeast! Let’s recap for a moment:
– Monday it was 50F and I was running in shorts … but fortunately I chose a light hat & gloves because there was a brisk wind and even some snow flurries.
– Tuesday was ‘Polar Vortex Day’ (wind chills below -30)
– Wednesday was colder than expected, I ran in -20F winf chills. Brrr.
– Thursday was again not quite the forcasted warm-up … it was 15F with some decent winds.

Which brings us to today. Today was supposed to really break through and hit 40F and bring in the rains and so on – and it will, but the forecast shifted yesterday and suddenly called for some overnight snow. Just a dusting, no big concern.

Well … we ended up with 2-3″ of nice fluffy snow. Not the crystalline powder from when it was close to 0F, but not the wet and slushy stuff either. The temperature this morning was 25F with light winds.

Because pretty much all of the snow fell after midnight, when I left the house at 4:30 it was still snowing and the roads were pristine except for the occasional tracks from the paper delivery person and the odd early-riser. There is a deafening silence when new snow falls, and it makes for one of my favorite times to run.

When you are out in non-dangerous snows, you have added effort from trudging through the snow, awareness due to lower visibility of road edges and ensuring safety with the few cars out driving, and awareness of potential ice patches hidden below the snow.

But aside from that you see rabbit tracks, which are fascinating when snow is falling – I could see where one rabbit seemed to keep criss-crossing the road every ten feet or so. There were tracks from a family of deer, different sizes apparent through the tracks. There was also a guy I regularly see walking his dog = it is amazing to see the path that dogs walk even as their humans walk a straight path.

I stopped to take the picture as I was heading back along a neighborhood loop close to my house, because it showed my tracks as a dominant feature, with a couple of car-paths as well. A bit after this I headed back to the main road for a few hundred meters, and it had just been plowed. It is amazing how you get used to running through the snow, so that when you hit the open road it feels like a weight lifted off of you!

So although the weather wasn’t what I planned for or expected, it made for a very enjoyable run this morning!

How was your run? How do you feel about running in snow?