Generally on Monday I do a ‘Motivation Monday’ theme, and today is a little different: I am doing three quick items, but all have a message. One is about National Running Day on June 4, 2014, the second is a great post about judgment and acceptance, and finally – a fun little challenge!

I am sure I could twist a motivational theme around them, around sharing ourselves, appreciating others as they are and getting out to celebrate whatever activity we love … but I won’t. So let’s get right to it.

Friday on Sara’s blog she posted on the ’10 Day You Challenge’ … and it sounded like fun, so I decided to try. Basically it is a 10-day program, and each day you focus on something new. Day One is secrets, day two is Loves, and so on.

So let’s jump right in with 10 things you might not know about me!

10. At my heaviest in 2012 I would often have a bag of peanut butter M&Ms at my desk for snacking, generally going through 2 ‘large’ bags per week.

8. I developed an intolerance to clams in my late-20s … right after attending ‘Chowda-Fest’ in Boston.
7. My worst habit is biting my fingernails, something I have done all my life. I have recently tried to trim them regularly, which helps – but it remains a stress habit.

6. Lisa moved back to Albany for school right as things were getting really close between us but we were still ‘friends’, and if she didn’t say something it is possible we would never have gotten together. This was due to my misinterpretation of things she had said and my still-building confidence causing a fear of losing our great friendship.

5. My vice? Soda. Sure I have a water bottle at my desk at all times, but for all of my lunch meetings and whenever possible I always get soda. It is no more than one a day at this point, but still … and NO I don’t consider my glass of wine a vice.

4. I have never texted while driving, but around 2001 had a Gameboy Advance in my bag and picked it up while driving to complete a round of Advance Wars … and went through a stop sign. Fortunately it was 5:30 and roads were empty … but the adrenaline was incredible and – lesson learned.

3. I am definitely a snob – intellectual and musical. I have gotten much better through the years, but because I place a high value on learning and curiosity, well … yeah, I am a snob. Oh – and it isn’t about intelligence, but rather curiosity and a desire to learn.

2. The only political party I ever belonged to is Republican back when Reagan was first elected – and the early 80s really DID feel different and more alive and positive. However, looking at my views on pretty much EVERYTHING now it is hard to believe … and Of course, that was in Massachusetts.

1. I have always been a tech early adopter, from my electronic music studio, early Apple computers, digital music in the car before the first MP3 players, and on and on. Oh wait … that really isn’t even close to a secret. So let me do one more.

0. My ‘social justice’ trigger has always been strong, and it got absolutely cemented when I went from fat to thin and saw tremendous changes in how I was treated by both strangers and friends. And it really gets under my skin when I see it happening now.

Two weeks ago I posted a rant about people harassing female runners (and really, women in general), and had more traffic per hour than I have on most in total most days. This is an important issue that really resonates with people.

So my passions got really ignited when I read an amazing post over at ‘Running To Her Dreams’ titled The Time. I Decided. Enough. Is F-ing Enough.

The post is excellent and really amazing how it builds throughout … but more than the great post, it has really stirred up the community, and I suggest you head over and check out the comments as well. Seriously … just do it.

This Wednesday June 4th is National Running Day, which is a great way to just get out there and do the sport we love. I think we can broaden it – and just make it ‘national get out and be active’ day! 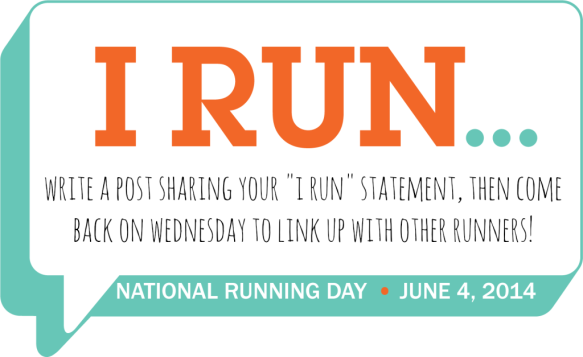 Cori at Olive to Run is having a link-up to celebrate as well which should be fun! Here is my statement:

I run because I love everything about running and it helps me be the best version of myself.

You can see more details at the official site!

So … in the comments, tell me one secret, a thought on the ‘enough’ post, and let me know what you plan for National Running Day?