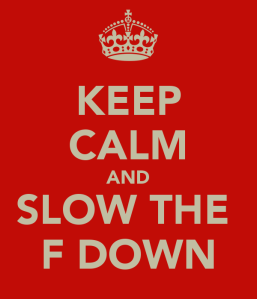 Why? Here are a few thoughts:

Driving
– Almost every day while running I will see two cars coming down the road (not busy at 4AM) … but even with just two, there is less than two car lengths between them. Yes, tailgating – nothing new … but seriously, SLOW THE F%$# DOWN!

– And then this morning, I was coming towards home and there is a 3-way intersection where most people turn left, and there were two cars with one tailing the other. The front one didn’t put on a directional, and it looked like the rear car assumed he was going straight because he started moving across the yellow line into the wrong lane to make the left turn when the first car made the turn … there was very nearly an accident, horns honked, and I heard more than a few choice words. Sure the front guy SHOULD have used his turn signal … but seriously, rear car? SLOW THE F%$# DOWN!

– In Massachusetts on Sunday a runner was struck and killed by a guy in a SUV. “20-year-old Haley Cremer was out running when she was hit at about 4:30 p.m. Sunday.” The driver had a suspended license from three traffic offenses within 24 months, and had been found at fault in 10 accidents. The town of Sharon is right next to where I grew up so I can picture the scene – and it was at the intersection in an affluent residential area, and one of the streets was a cul-de-sac! Too many runners have been killed this way … please pay attention, come to a complete stop at an intersetion, look both ways, and SLOW THE F%$# DOWN!

School
– My younger son pretty much summed it up: he is ready to be done with school for the year … but not done with being a sophomore. He is ready for life to SLOW THE F%$# DOWN!

Work
– An article at Monster this week made for an interesting read – it was about ‘why Americans don’t like vacations OR work’. It talks about how Americans lament that they have the least amount of vacation time in the industrial world (none is mandated), and yet in general people leave at least some of the time they DO get unused.

The glaringly awful Cadillac ad implies that the result of that is more work, but here is the thing: “Here’s the caveat: There’s actually no proof that working harder (and not taking time off) leads to greater success.”

But there IS proof that ‘down time’ has significant health benefits. So? SLOW THE F%$# DOWN!

– Further to this, yesterday Megan posted that she had to ‘forgive herself’ because she was looking at a workout or recipe photo opportunity during her hyper-scheduled day … and took a nap instead.

Now I am not opposed to detailed scheduling at all – depending on my projects and life at the moment I will have somewhere between an incredibly detailed daily plan and just what is on the family calendar on the pantry door at home. It is all about what works for each of us. My point? Naps can be AWESOME, and are a great way when you are over-stressed, under-sleep, and so on … but if you feel guilty because you needed to stop and take a moment to recharge? Maybe it is time to SLOW THE F%$# DOWN! (sorry Megan! 🙂 )

– A few months ago I wrote and lamented that I felt like I was wishing away time because I constantly felt like I was DONE with the -20F days of winter, and at the same time we were dealing with some issues with our ‘hihg efficiency’ furnace. I was really down on myself about it – because honestly I am normally a ‘savor the moment’ type of person, and really want time to … you know.

– Last week Hollie posted bemoaning the humidity and its impact on her training, which I totally got. She said “I’ll continue to whine about the heat but in reality I’m logging injury free miles. Despite being slower, I know I’ll feel fabulous when fall rolls around again.”But looking at it and also many of the comments that were frankly whining about summer and wishing for cooler fall temperatures to arrive.

And at the same time we have gone through warm and cold temperatures the last couple of weeks here, so naturally I have heard people complain about BOTH hot and cold, wishing for more summer and for hte fall to hurry up and get here. It is frustrating to me that so many people seem to spend each day wishing to be somewhere else in time.

How are we already half-way through 2014? Please someone tell this year to SLOW THE F%$# DOWN!

– This is interesting. We need sleep to survive, and also know that most people are chronically fatigued (and dehydrated) – rest is critical. But as the Monster article I noted before says, we are working more, taking less vacation, and resting less than ever before.

OK, so … ? When I did my ‘Three Films’ post there were notes about not being into movies, and when I and others did Liebster posts that included movies … I saw many people saying they didn’t watch movies – and one of the most common reasons was that if they sat down to watch a movie, they fell asleep. Guess what? If that is true, you are exhausted, and should Go The F to Sleep! Yeah, I am saying you need to SLOW THE F%$# DOWN!

– I have already noted that I ‘call BS’ on so many people posting ‘easy’ runs that really make no sense in the context of what the person has demonstrated. Easy is different than ‘felt great’, and is more about building a base than doing focused training. Why do I care? Because there are only a few possible directions this all goes – it can fall in the ‘unreality’ bucket, reduce the effectiveness of training (too tired when you are supposed to do high impact training), or land you injured (again). If your plan for the day is ‘easy’ paced miles, I don’t care what you THINK as you head out the door – do yourself a favor and SLOW THE F%$# DOWN!

– Another great post by Hollie talked about her week in training, but had some great perspective: “My miles this week weren’t incredibly fast. … As I said on Thursday, injury free miles are always my priority and they aren’t something I will complain about.” This is an incredibly important way of thinking about things.

Look – every runner wants to be faster, run longer distances and no one wants to be injured. But at a certain point there are choices to be made: there are a couple of ironic building sayings “tighten the screw until the head breaks … then back off a half-turn” and “no matter how many times I cut it is too short!” In context what I am saying is that there is a cross-over point where our pursuit of speed and distance runs into our attempts to avoid injury.

At that point we realize that you can’t ‘back off a half-turn’. And in this case when I say we all need to SLOW THE F%$# DOWN!, I am talking about literally and figuratively – pace yourself through gradual improvements, and take the time to really analyze what you are trying to do.

Personally in the last two years I took ~40% off my ‘normal’ pace, most of it during the first year with more gradual gains this past year. I could have pushed more for additional speed gains, but after the PA Grand Canyon last year I had a long self-talk and decided staying injury-free was my #1 priority because it is love of running rather than any race or pace that is my passion.

– I just finished a couple of ‘post campaigns’ – ’10 Days of You’ followed by my few ‘what caused my blogging hiatus and what I learned’ series – and they were EXHAUSTING! The comments were … incredible. I am constantly touched and moved by how awesome all of you are. Seriously. But as I say – exhausting. I really need to SLOW THE F%$# DOWN!

– So if you haven’t noticed I have already removed the ‘weekly post’ labels – this isn’t a ‘Take Care Tuesday’, there wasn’t a ‘Five Things Friday’ or ‘Motivation Monday’ and so on. Doesn’t mean those posts won’t happen, but by removing that weekly focus I can write when I want to. And so that is what I will do. Will I post tomorrow? Who knows. My focus is going to be more on writing when I want to and doing what I feel is worth sharing and taking your valuable time.

– In terms of reading, this week I’ve added about a half-dozen blogs to my reader, and not removed any. This I already know is not sustainable, and am already doing a couple of things differently with these new blogs:
* adding more blogs to my ’email me new posts’ list, and if I delete without clicking more than two times in a row – I will delete the subscription.
* Doing more from the iPad WordPress app. One thing I have noticed? Some blogs won’t allow me to comment or ‘Like’ their posts. It isn’t always a self-hosted thing either. Suffice to say, unless I already love you, if I have to click through to get value from your post (read other comments, post my own, like and share) … chances are you are gone. Yes I know it is probably about advertising clicks, but sorry … not sorry.

Being more efficient in my blog reading and writing will allow me to enjoy the blogs I love even more and hopefully continue to write with passion while maintaining my busy life.

Life
– As I said at top, our younger son will be a junior and our older son a senior in high school next year. That means college trips this summer and tons of time spent on essays, applications and so on come the fall. With our busy schedules it is hard sometimes, but so important to SLOW THE F%$# DOWN and take the moments like I did yesterday to ask about their last day, just chat for a few minutes and see how it is all going for them. I have realized that it is also one reason I don’t mind that much when I have to drive them to school …

– This morning Lisa and I sat drinking coffee on the porch as I ate my breakfast and the dogs watched and listened for anything of interest in the very quiet foggy morning. It was slow, lazy, and relaxing and awesome. Last night she didn’t get home until after 7PM, so by the time we’d finished dinner and cleaned up and were sitting down outside it was almost 8:30 and she felt like we should go for a walk, but was also totally exhausted. Relaxing is SO hard … but in reality we all need to spend more time in the moment, enjoy the people we love, and just …

In What Ways Do You or the World Need to SLOW THE F%$# DOWN!?