Continuing with my 30 Days of Gratitude, I am thankful for my two amazing boys. 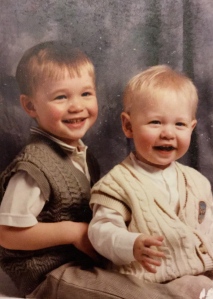 When you have a child … well, several things happen. It changes your life in a whole lot of different ways.

For me it shifted priorities and made things very clear – before kids with both of us working long days, always on the go somewhere and so on … and after kids we were always on the go somewhere – but the focus changed, as it was suddenly school and sports and heading to museums and parks and parties. Personally it helped me draw clear boundaries between work and family, not that I didn’t ever work weekends, nights or travel – but it was a clear decision based on need rather than ‘well, Lisa is working so … whatever’.

I won’t go into their whole stories, as those are for them to tell … But I want to quickly talk about these two wonderful young men who make my life better every day.

Pumpkin Picking back in Massachusetts

I have talked about how Danny’s birth was like a party, and for me the whole four day stay in the hospital was great. Discovering how sturdy he was, how incredible it was to snuggle him, and just everything about being a new dad was a revelation. Lisa had a C-section so we were there for four days, and the reality check was going home and having to do it all ourselves.

From the very start Danny was his own person, but also full of life and light and a quick and easy smile. He has my ease of blending into most any crowd, with the accompanying realization that not standing out means not standing out. Yet he has shone in many areas – from drama to music to youth court and as a young film maker, he has done some amazing things in areas very different than anything I ever did.

It is interesting looking around our house and back through time – early on he showed a great aptitude for art, and took summer art classes in Fitchburg where the teacher singled him out for potential and displayed some of his stuff even outside of the confines of the usual student display. But a couple of years with a pedantic and harsh art teacher in elementary school quenched his love of art – at least in terms of drawing, painting and sculpting. It is interesting seeing now how that love redirected itself into other areas … I guess the saying ‘when life closes a door, open a window’ is very applicable.

What has amazed me is how the high school years have produced a strong, secure, and mature young man (ok, yeah, with plenty of teenage boy in there as well!). He has a good group of friends, is a loyal person, quick with a joke but also a good listener, and is much better than I was at his age at dealing with his emotions (despite having that same penchant for squishing them down beneath his knees).

His style has also evolved from skater-dude and rap-fan to very stylish (I’d estimate he wears a jacket and tie at least twice a week) who has a deep appreciation for everything in the arts. He is applying to schools for film, looking at a Fine Arts study … but also loves acting, singing, and writing. His ability to craft a tale, write believable dialogue and his use of language is just incredible – and I hope it brings him much success and satisfaction.

I’ve also described Christopher’s birth many times … and it was traumatic for all involved. Lisa had great difficulty due to significant scarring from Danny, Chris was breach and nearly drown in the amniotic fluid, Lisa’s digestive system wouldn’t restart and she was in the hospital two weeks with the chief of surgery keeping a close eye, Chris had two bouts of apnea and turned blue in front of my face once, and spent time in the NICU (where the nurses loved having a huge baby, since he was more than TWICE as large as the next biggest baby in there!). There were lingering effects from that rough start we dealt with for a few years, but he always had the most amazing smile, the cutest fly-away blond hair … and one heck of a personality.

Whereas Danny blended in like me, Chris is more like Lisa and has a strong personality. That can be good … but it also has downsides. There were always a group around him … but also always one or two kids who were very strongly negative. And like too many of us, as a young kid he couldn’t get past those who disliked him to focus on the great friends he had.

His flair for drama was apparent from the earliest years, and he always shone in productions even from the earliest age, and was something he excelled at through middle school, though he has focused on working on the tech crew through high school rather than being on stage. The tech crew focus comes from another love – music technology.

I know this sounds like typical parental blind bragging, but I have seldom seen anyone with as strong a raw musical concept and vision as Chris. This isn’t necessarily instrumental focus – we could tell from his early years of piano that he wasn’t going to be a concert pianist, as after he surpassed what his first teacher could provide, he frustrated his second teacher who wanted pure classical interpretation while Chris wanted to rework the melodies and rhythmic pacing and flow. I love hearing his music, or his interpretation of music.

But music isn’t his only skill – from his earliest days he has had a love of cooking. Easy Bake oven, Harry Potter potions lab and so on … then on to making real food. Lisa and I have become really good cooks and bakers over the years – but Chris has a natural gift. Another talent that has appeared recently is photography. He took a couple of pictures out of our moving car to use for a cover for his EP, and converted them to black & white … and they were amazing. He has a great eye for shots, and helped Danny film his portfolio film.

As for where he goes next, who knows – he is in the middle of his toughest semester of school, taking dual AP classes, a college level (ACE) chemistry, calculus and creative writing. He is thinking about culinary arts school such as Johnson & Wales that will focus on the business aspects as well as culinary skills … and I know he would truly excel.

I have talked about wanting to move back to Massachusetts in the future, but the reality is this: home is with Lisa, and in proximity to our boys. We have no real ties to any place or even region (aside from our current jobs and having a mortgage), so if that means moving south or west or whatever … we can do it. And will.

The decision to have or not have kids – or the reality of biology we thought we faced for a long time – is very personal and no one has the right to make that for you or to question your choices. For us, having kids when we thought we couldn’t was an amazing blessing … and while there are many times our boys drive us nuts – they are our babies, and a huge part of our lives. They are past the point of us really being the major force of influence, but we maintain a close relationship and try to be a postive guiding force.

Now we can just sit and hope that they get to show the world the reasons for the great joys we have experienced all of these years.

Do you feel tied to a place or region, or would you move around easily?

And yes, this Thanksgiving they each got a sample of wine.