At this time of the year there seems to be as much discord – over shopping, rampant commercialism, the ‘war on Christmas’, whatever else – as there is ‘peace and love’ that the holidays celebrated would suggest.

So instead … how about something howlingly funny? 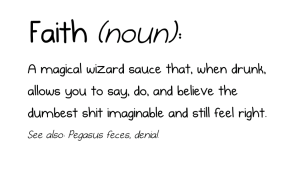 I am an unabashed fan of ‘The Oatmeal’, and recently he was doing a keynote talk at BAHFest (FESTIVAL of BAD AD HOC HYPOTHESES) which has been released on Youtube and gotten a ton of views. It is about his view of the universe, and his deity that he calls Jibbers Crabst … for the rest, just watch and listen (oh, and watch the sign language interpreter as well!)

Note: everything about this is disrespectful and irreverent towards organized religion, but is meant purely as humor. If you cannot find humor in such things, I suggest you skip the video. Also, rampant profanity.

12 thoughts on “Creationism? Evolution? Matthew Inman (The Oatmeal) Has Another Idea!”