April is Sexual Violence Awareness Month. Did you know that? I didn’t, until Suzie retweeted a post at FairyBurger called ‘Sexual Violence’. Since I consider myself socially aware, that bothers me – I mean, we see all sorts of things on Twitter and Facebook and Tumblr and Instagram every day … why does THIS important issue get so little visibility? 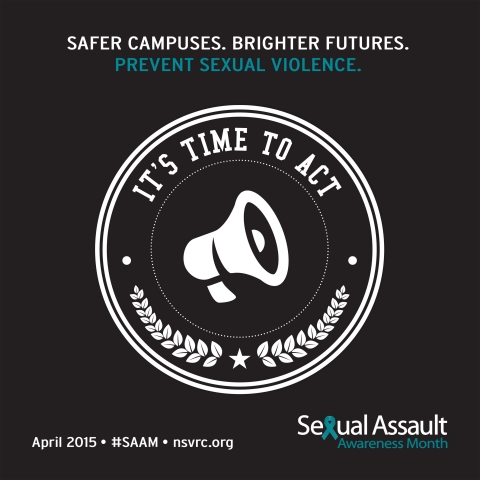 The focus of the National Sexual Violence Resource Center campaign for 2015 is ‘campus sexual violence prevention’. There is WAY too much data and evidence of the incidence and impact of sexual violence in our society. As I have a child who will be heading off to college in the fall, and I worry all of the time about his safety and well being.

For young kids in college the possibility of sexual violence during this vulnerable time is all too real. While they are technically adults, for many this is the first experience away from home as an independent person, and that reality can come with some awful consequences.

Sexual Violence At A Glance

On April 1st President Obama shared a statement regarding the month:

Nearly one in five women in America has been a victim of rape or attempted rape. Every year, too many women and too many men are sexually assaulted and abused. This is an affront to our basic decency and humanity, and it must end. Sexual assault harms our communities, weakens the foundation of our Nation, and hurts those we love most. For survivors, the awful pain can take years to heal — sometimes it never does. When an individual’s possibilities are limited by the scars of violence and abuse, our country is deprived of enormous potential. Sexual assault takes a collective toll on all of us, and it is everyone’s responsibility not only to speak out, but also to take action against this injustice.

And he concludes by saying:

I urge all Americans to support survivors of sexual assault and work together to prevent these crimes in their communities.

One of my best running blogger buddies Laura is working towards her PhD in Women’s Studies, and is undertaking a huge goal – a Cross Country run to raise awareness of the impact of sexual violence. The run happens in 2016 and you can follow along here.

I wrote about this last year, highlighting many articles that seemed to keep popping up in my feed of what women runners had to endure because they were women … who were running. Far beyond lewd catcalls, they are tales of groping and grabbing and stalking – and we’ve all read about female runners who were murdered!

I noted my own experience being cat-called, saying that while it resembles what women experience in a superficial way, in reality it is critically different:

I have absolutely no real concern of being physically sexually assaulted. I know it happens, but it is so small compared to the likely hood of a woman being assaulted – even killed – for no more than being a woman out for a run. It is disgusting.

This behavior is unacceptable

Regardless of where you fall on social justice issues or the political spectrum, this seems like a topic we can all agree upon – we need to make sexual violence history and make all of the kids who head to class in the fall feel safe. And all of the people in airports, walking down streets, going to conferences and meetings and grocery shopping … and even just heading to their car after work.

I long for the day that I no longer feel the need to talk about this issue.

Running Around the Bend