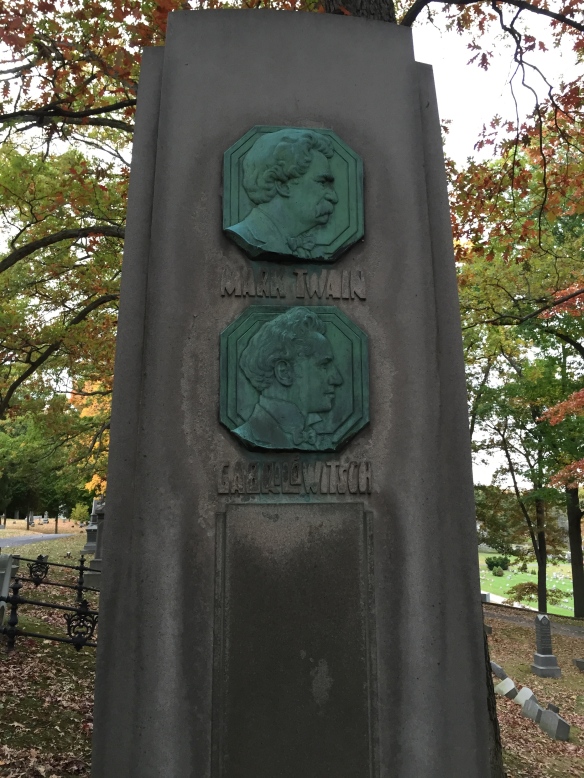 Hey all! Happy Wednesday! I had a few things simmering that I wanted to put out there, and a New Year’s decision pushed me to put them out today. So let’s just jump around *** with it ..

Over the last couple of weeks I have spent time cleaning up my Twitter and Instagram feeds (no plans to mess with Facebook) as if with a machete. Some people weren’t following me back in spite of my follow and even exchanging comments, others I had no idea how/why I was following, and on Twitter I had to get rid of most of the super-chatty folks as well as people obviously marketing stuff. It has helped my accounts become more manageable, which is awesome.

But on Monday morning as I opened up my email after barely touching electronics all weekend (yay!), I read all of the pent-up blogs in my email as well as my WordPress reader. And my thought? Well THIS has to stop right now!

So I took a ‘scorched earth’ approach and simply started unsubscribing from the mailing lists of blogs and removing any that I did NOT get on email from my WordPress reader, and also killing anything I hadn’t opened in a week from my RSS feeds. Basically, if I didn’t follow your blog before I launched this one, I no longer get an email, if I didn’t get an email this past week I no longer follow you on WordPress, and only a very few blogs remained on RSS (basically those I can’t get through WordPress or email … like Blogger blogs).

So again, nothing personal … I needed to cut WAY back, and I also need to stop feeling like I have to comment on every post I read so you know I stopped by. If I ‘liked’ it, I actually DO … and if you don’t have a ‘Like’ button? Argh! As to how and when I will rebuild? Who knows.

The image at the top is from the Mark Twain grave site, which is in the Woodlawn Cemetery in Elmira NY, about a 10 minute drive from our house. Lisa and I did a fun graveyard tour just before Halloween this year, and the curator who did the tour took us through all of the details of many area families, especially the whole tale of the Mark Twain connection to the region.

I’ll be honest, I’m not a huge ‘know the backstory of the person behind the art’ person like seems to be so popular today, so I never dug into the Twain connection – just assumed it was a ‘George Washington Slept Here’ thing. But it was not. He was buried here for a reason.

But sadly at some point between Christmas and New Year someone removed the likeness from his gravestone. It is noted in the local paper, where they say:

“Somebody had to bring in a ladder,” Hare said. “There has been vandalism in the cemetery over the years, but there has never been any at the Twain site, which is a revered site. Desecration of any grave is a horrible thing for people to do.”

This is a pretty sad thing – awful for someone to have done in general, and also because as towns and cities are continuously squeezed to do more with less money, things like graveyard maintenance fall to the bottom of the priority list. And to have one of our country’s great authors grave site defaced like this is a shame.

The only good news is that there was a cast made of the original plaque which could be used to create a new one.

Over at Buzzfeed a couple of weeks ago there was a video about ‘what it is like to be a former fat kid’.

As a former (recovering?) fat kid, I certainly can identify with many of the things the people list. But as we have discussed here before, we could change it around to say ‘what it is like to be an adult who was body shamed as a kid’ … because that crap hurts whatever reason it happened.

So Sarah Palin posted a picture of her 6+ year old standing on their dog. It sparked some outrage, including from PETA. Palin replied … well, I just posted the whole thing below. But one thing she DID note was Ellen Degeneres posting a picture of a small child (2 or 3 years old) standing on a dog.

Her point? Hypocrisy, of course … and the assumption that her frothing supporters would be so quick to be outraged and butthurt that they wouldn’t even contemplate comparative analysis regarding the size/weight ratios of the children and animals (I mean, they DO watch Fox News, so facts are obvious not a priority).

Anyway, I don’t recall the Ellen pic, but we were very clear about the safety of children and animals in our house … so, no dog standing.

ANYWAY … forget the factual discussion, read Palin’s missive and just LAVISH in the crazy as it washes over you …

Hey, by the way, remember your “Woman of the Year”, Ellen DeGeneres? Did you get all wee-wee’d up when she posted this sweet picture? http://conservatives4palin.com/&#8230; Hypocritical, much?

Did you go as crazy when your heroic Man-of-Your-Lifetime, Barack Obama, revealed he actually enjoyed eating dead dog meat?

Aren’t you the double-standard radicals always opposing Alaska’s Iditarod – the Last Great Race honoring dogs who are born to run in wide open spaces, while some of your pets “thrive” in a concrete jungle where they’re allowed outdoors to breathe and pee maybe once a day? (http://iditarod.com/ http://www.irondog.org/)

Aren’t you the same herd that opposes our commercial fishing jobs, claiming I encourage slaying and consuming wild, organic healthy protein sources called “fish”? (I do.)
Aren’t you the same anti-beef screamers blogging hate from your comfy leather office chairs, wrapped in your fashionable leather belts above your kickin’ new leather pumps you bought because your celebrity idols (who sport fur and crocodile purses) grinned in a tabloid wearing the exact same Louboutins exiting sleek cowhide covered limo seats on their way to some liberal fundraiser shindig at some sushi bar that features poor dead smelly roe (that I used to strip from our Bristol Bay-caught fish, and in a Dillingham cannery I packed those castoff fish eggs for you while laughing with co-workers about the suckers paying absurdly high prices to party with the throw away parts of our wild seafood)? I believe you call those discarded funky eggs “caviar”.

Yeah, you’re real credible on this, PETA. A shame, because I’ll bet we agree on what I hope is the true meaning of your mission – respecting God’s creation and critters.

Our pets, including Trig’s best buddy Jill Hadassah, are loved, spoiled and cared for more than some people care for their fellow man whose politics may not mesh with nonsensical liberally failed ways or don’t fit your flighty standards.

Jill is a precious part of our world. So is Trig. 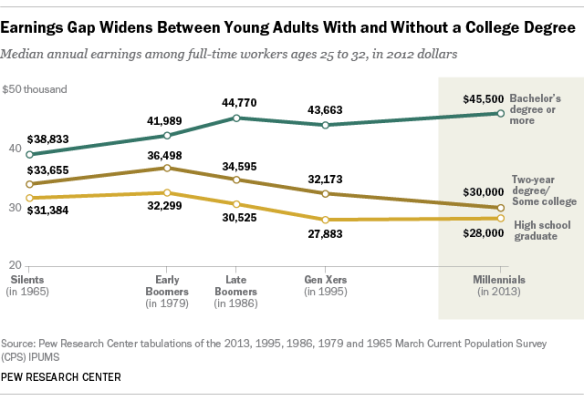 Being a statistics dude and engineer means that I love having loads of data to gather and play with and am always looking for cool new ways to visualize that data. This week I came across a summary of a number of things from 2014 at the Pew Research site.

The image above compares median income of kids 25 – 32 (sorry, ‘adults’) who have a 4-year college degree with those with a 2-year degree or just a high school diploma – and the results show a greater disparity than ever. Recently there has been much discussion about the value of a college degree – but that is largely in the context of the staggering debt incurred by more and more college students.

As a parent sending one child off in a few months to what was ranked the #2 Most Expensive Undergraduate School, and another heading to college next year … this stuff really hits home for me.

After a relatively mild pre-Christmas to post-New Year we have gone straight back to last years Polar Vortex it seems, with high winds and a display of the ‘many ways to get to sub-zero wind chills’. But of course I still go out for my runs – and the awesome news is that the Brooks 3-in-1 gloves my boys got me for Christmas are the absolute best things I have EVER (in nearly 26 years) worn on my hands. Each year I enter in fear of frost-bite, but now I can leave the house with confidence of returning with all appendages intact.

So … how are YOU? And how’s Winter treating you?