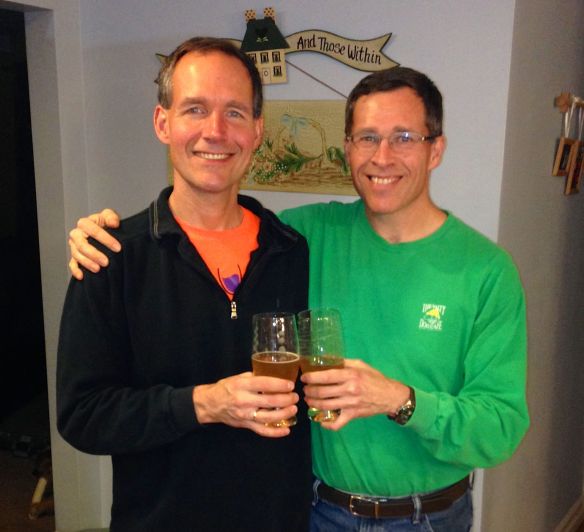 A year ago yesterday I posted the following on Facebook:

Asking for thoughts and prayers for my brother John Anderson, recovering from a very serious heart attack … yesterday morning he had the heart attack while at the gym, and fortunately they have a nurse on staff and the person next to him was a doctor. but it was a massive heart attack. He woke up briefly tonight, which was a very good sign, but he has a long road ahead.

The picture at the top is from this past Christmas – so you can be assured there was a happy ending! But when I wrote that, my brother had suffered a major heart attack, and had yet to really regain consciousness. It was slow going, and even now he has to deal with a new reality in how he goes about his life – but he is here, with his kids, friends and family.

It took a while for him to understand and accept how serious things were, even though he’d already had one heart attack (a minor one in 2006) and even as they implanted a defibrillator in his chest!

At that point I decided it was really time to get a full cardiac workup – not just because of my brother, but because I was the only one left in my immediate family who hadn’t had serious heart issues. My dad had a very serious heart attack at 45, and now with my brother having two at 43 and 49 – it was time for me at 47 to get myself checked.

The wonderful thing is that although there is that great saying ‘an ounce of prevention is worth a pound of cure’ – that isn’t how our health care system works. Think about it – between co-pays, deductibles, co-insurance and so on, the up-front costs are enough to keep healthy people from ever getting routine checkups. Then there is the ability to get anything beyond a routine checkup … fortunately I have a good relationship with my primary doctor, and she made sure I was able to get into a cardiologist in the same practice.

I wrote about this before, but basically where my brother got all the bad genes – cholesterol, blood pressure, etc – I got all the good ones. And aside from my thyroid my heart and cardio-vascular system is in great shape.

My message? Take care of your health – make figuring out your risks a priority, even when it is more money than you want to spend. Especially when you are younger – during your 20s and 30s you might still feel indestructible, but these are the years where a history can build. Learn your numbers, where your body is strong and weak, what you need to watch and what you don’t and so on. You don’t want to be feeling lousy when you need to know what is ‘normal’ for you and have no idea.

Take care of your health – eat reasonably well, stay active, keep to a healthy weight (and more and more research says weighing a bit too much is better than weighing to little), and keep a regular set of checkups. And know your family history of risks and make sure your doctor is aware of them. Do everything you can to make sure you are around for as long as possible with the ones you love. 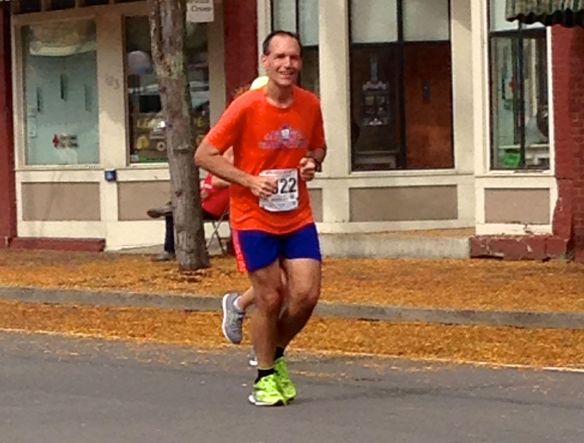 So – here is a post on my running blog about … RUNNING! I know, right?!? I run every day and do talk about it occasionally, but I don’t do a lot of round-ups of things running related. I always just assume that we all read the same things … but maybe not – so I decided to highlight some cool things I have been checking out the last week or so!

1. Harold Rains on Our Parade – one of my first and favorite running blogs when I ‘got serious’ about running was Harold Shaw’s ‘A Veteran Runnah’, which is now Runnah.com. Some of it I know is because he is an ‘old faht’ like me, and an east coaster with all that entails.

Two weeks ago Harold had a great post about running shoes that I thought was so essential that I suggested he ‘sticky’ it, and he has made it a menu choice since then. Unfortunately, for many it will be disappointing, especially as he says:

In a followup from earlier this week he talks about the ‘running shoe pendulum’, in which we get a look at how running shoes change, and how we are constantly being told to ‘do this to be your best’ – even if it contradicts what was said LAST year!

Both of these posts are great reads and highly informative – I recommend taking a few minutes to check them out.

2. 15 Best iPhone Fitness Apps – yeah, another one of THOSE posts … I have to confess that within about six months of looking at blogs and online articles, I was already bored with the ‘8 Things Beginning Runners Need to do RIGHT NOW’ or whatever style of posts that obviously were ‘hit bait’, recycling the same content they used slightly differently the previous month.

ANYWAY … over at Active.com they have a fun list of 15 iOS apps that all do things a little differently, from Virtual Runner that lets you pretend you are running the Boston Marathon as you ride that treadmill … to the Daily Burn that lets you buy loads of workouts to keep yourself going all year long.

I don’t tend to use too many apps for fitness – Wahoo Fitness for my Magellan Echo, Garmin Connect to track miles from all of my sources, and RunKeeper for tracking when we just go out for a walk. So I don’t know if I will use these but it was fun looking at all of them!

3. My Recent Running Tech Reviews – As many know already, I am also a writer and editor over at Gear Diary, working with a great crew of people (in addition to my ‘day job’ at Corning). I talked a little about the Magellan Echo and Polar RC3 GPS watches in my review round-up, but now my full reviews are out including video.

I also reviewed the Wahoo Fitness app for iPhone because it was needed to maximize utilization of the Magellan Echo. Here are the links:

4. How to Keep Running Affordable – Amanda at Miss Zippy had a fantastic post on ‘Five Steps to Affordable Running’. She does a great job laying out five common problems, and their solutions. Here is one about GPS watches:

5. The problem: GPS watches are expensive. No matter what the brand. The solution: Truly, you don’t need one to train effectively. Until about five years ago, most people got by without them just fine. You can train just as well by time, by mapping out a course online, or by using a simple sports watch.

I have said that using a GPS watch was key to making myself accountable for my running, but when it has been so cold this winter I have barely looked at anything beyond the mileage … and even then everything is an approximate because I start the watch before I am done gearing up and stop it after removing a couple of layers, so the numbers aren’t remotely accurate.

But I think it is important to look at what we spend on ANY activity and ask – is this something I NEED, or am I just following a trend? Check out her post, definitely worth reading and thinking about!

5. Heart Healthy Foods for Runners – heart health is incredibly important to me for a couple of pretty significant reasons:
– My father nearly died from a heart attack at 45 when he tossed a clot from his leg. He has since had bypass surgery and a defibrillator installed.
– My brother nearly died from a heart attack last April at 49 while in great shape and in the middle of spin class. This was his second (first was minor) and he now has a defibrillator installed.
– My sister ALSO had a heart attack, my mom has had bypass surgery, and there is history up and down both sides.

Last summer I worked with my primary care doctor and got hooked up with a cardiologist I really like and did a stress test and had a full cardiac workup … and got a clean bill of heart health! But that doesn’t mean I can relax – I might have the ‘good genes’ in terms of blood pressure and cholesterol as well as my running … but why take a chance?

Over at Runner’s World there is an article looking at a heart-healthy diet specific to running, including sodium and different fats as well as links to a variety of studies. It is always a great reminder that what you eat is just incredibly important.

6. Beware of Ice! – also this week was a video that went viral, and was picked up on HuffPo and a billion other sites including RunBlogger. OK, first just watch the video …

Over at KOIN there is a follow-up, noting that the first comment on the fall came from Chelsea, the woman who fell (the man’s name is Michael … no relation):

“As the chick in this video, all I can say is that running in powder when there’s no one else out at night is a s—load of fun. But stopping to pose for the local news station in the middle of the icy street hurts like a bitch. Glad it’s as funny for everyone else as it was for us.”

Pete Larson titled his post ‘Thou Shalt Not Laugh at a Fellow Runner’, because he got a chuckle out of the video … and subsequently hit an ice patch himself and took a spill.

I don’t know about you, but watching that video all I could think watching them running away was that she was INTENTIONALLY running for the ice – not because it was ice, but likely thinking of wet blacktop as just a wet patch and easier than the snowy road.

This morning in the aftermath of the snow I was thinking about that as I ran – it was the type of morning where plows and cars had traveled over the roads to the point there were areas of thick snow, slush, bare pavement, and thin layers of snow and ice. It was WORK to keep myself safe and secure the entire time … and every time I approached a blacktop wet area I wondered if it was icy or not – so I avoided it!

Did you see that video? What did you think?

Bonus: At Competitor there is an article about HOW compression hear works … and also surveys the research on IF it works. It is their typical (and annoying) multi-page format, but there is interesting stuff there. Personally – I have worn compression socks since I got a couple of pairs of them for Christmas … and I am a believer in their recovery impact!

Happy Saturday! Did you find any cool running links to share?

Running Around the Bend